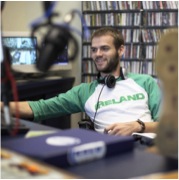 Campus Radio is a type of radio station that is run by the students of a college, university or other educational institution. To us it is all about educating the pupils on campus and training them so that they can achieve their dreams. Many campus radio stations carry a variety of programming including news (often local), sports (often relating to the campus), and spoken word programming as well as general music. Often the radio format is best described as a freeform, with a lot of creativity and individualism among the disc jockeys and show hosts. We set up everything from the name of the station, the music, the competitions, times of shows and much more. We are the future of high school and campus radio.